Book Review: “For Those About to Cook” by author: Bruce Moore

“For Those About To Cook is a collection of recipes, anecdotes and pictures from musicians and music industry personnel. With contributions from numerous musical genres and countries, this is truly a multi-genre and multi-ethnic collector’s cookbook. Readers will be presented with recipes ranging from appetizers to full course meals and desserts. For Those About To Cook is more than a cookbook: it is also a fan collectible as it includes short informative biographies, high quality pictures of the artists (mostly in a kitchen setting), pictures of the food and, in some cases, a quote about why the recipe or food is important to the contributor. Bruce Moore, the author, is a regular weekly contributor to PureGrainAudio, and has been published in various national and international music magazines including HM Magazine, Thrash Magazine, Crave, Sick Drummer, and The Gauntlet.” (from Amazon.com)

Let me first make a statement about myself: I am NOT a cook – NOT! I am not likely to be found handling any food whose preparation needs the use of the oven or the stove – especially the oven – it is very scary to me.

With that said, a number of weeks ago I entered a contest where the prize was a COOKBOOK! Now, while I do not cook, I definitely like books, and I will admit to a cautionary liking of cookbooks.

That was the case with this book: “For Those About to Cook” by Bruce Moore. I liked the front cover – it is black and white and pictures a guitar case with a large fork pictured inside of it! The title also tempted me, the part that said ‘about to cook’, implied that this was for people who had never cooked before! Much like me! The title did not make any statement that included words like ‘learn how to cook’, ‘easy lessons’, ‘make raw meat your friend’, or ‘cook a turkey by Christmas’!

So, I emailed the publisher, Safkhet Publishing, in the United Kingdom. That sparked a series of emails between me and the contact at Safkhet, with me asking questions about the book and its contents. Eventually, I decided to enter the contest – to win a cookbook! And I will say that I was quite excited and really hoping I would win. I guess I was destined to win, because win I did! Yahoo!!

When the cookbook arrived I eagerly opened the package, while my husband stood beside me, wondering what the package contained. “It’s my cookbook!” “Your what??? If it’s a cookbook, it’s mine!” (My husband is the cook in the family, as you may have gathered). 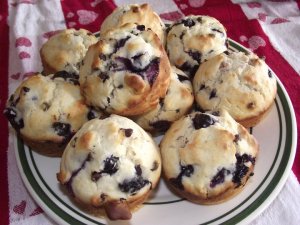 As I took my initial browse through the book, I was reminded of what was mentioned in the book description, that the contents consisted of “contributions from numerous musical genres and countries”, and that it “is truly a multi-genre and multi-ethnic collector’s cookbook”. Each recipe is from a different musician: Mike Farley, Murder by Death, Torchbearers, Guns N’ Roses, and Nephesh, to name but a few.

The author, Bruce Moore, of course included a couple of his own recipes: Jalapeno Poppers from Hell, (dare I say mmm, mmm), and Tomato Soup Cake, which includes Cream Cheese Frosting. The cake and frosting are contest winning recipes from Bruce’s mother-in-law.

Bruce Moore took this cookbook project to heart and that is obvious on every page. The artists come from all parts of the globe, including Brazil, Scandinavia, Germany, Canada, South Africa, the United States, and Sweden. Most, but not all of the bands, are heavy metal. And while some of the groups are outside of my usual genres, their recipes may well become my genres, even if not made by my hands. 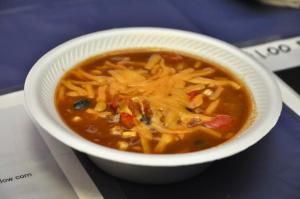 Chili created by Becoming The Archetype

In some cases, such as with the group Scythia, individual band members have submitted favourite recipes. I happen to be a fan of wraps, so trying Celine’s ‘Super Yummy Quinoa Wraps’ was a must. The wraps were fabulous! I will definitely be making these again.

Now, for some big news! I decided that I would actually cook something that required extended use of the stove, and flipped through the pages to make my decision. I was very tempted by the yummy sounding ‘Daniel’s Chili Margarita’, contributed by the bass player of Dark Tranquility, Daniel Antonsson, but chose to head for a meal instead! (Well, it said ‘chili’).

I am trying to add more eggs to my diet, so I chose to cook ‘Breakfast 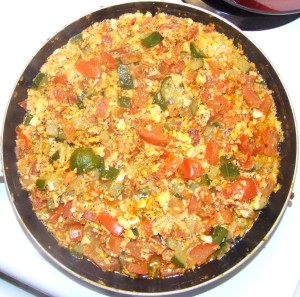 Scramble’ created by Jasper Lindeboom (aka Kildrith), of the Christian black metal band Borgazur from The Netherlands. For some of you this recipe might not be challenging, but for me…….. I made sure I followed the recipe to the letter – not even any spice substitutions. And I must say the results were very good. I even took pictures, and am showing one off here! Success!! Feeling supportive as always, my husband clapped for me!! Ok, ok….

The layout of the book itself is very well done. In fact, it turns it into a book that you could just read, and learn about the music industry people behind the bands. Each recipe is accompanied by a description of the band that created it. The name of the band, their genre, where they are from, a short description of their style and on-stage presence, and if the recipe has been contributed by an individual in the band, we learn that person’s name, their role in the band, and maybe a word or two about the person themselves. Plus, Bruce Moore gives us links to the band’s website, Facebook page, MySpace page, or whatever social media outlet that fits. Once you try a recipe, let the band know, let Bruce Moore know, tell them what you tried and how it turned out.

A lot of work and effort went into putting this cookbook together, and as I said earlier, this is obvious from the details included inside the pages. As a non-cook, I strongly recommend that all the cooks and non-cooks out there, buy themselves a copy and get cooking! If you happen to enjoy a particular group and have one of their CD’s, play it while you are cooking! That should put some power behind the punch of whatever dish you have chosen.

Maybe you are looking for a gift for a music lover on your list; this fan collectible would be just the right choice.

Just think, obtaining pictures of a band member in the kitchen is not your usual fare!

Bruce Moore’s book, ‘For Those About to Cook’, has not been put on one of my regular book cases in my reading room, but will remain – with handy shelf access – in our kitchen, where it belongs. If I happen to read about how fellow Canadians, Hunter City Madness, create and spread their music like wildfire, while I prepare ‘Hunter City Salad’ – that’s a bonus for me.
And yes, salad IS cooking……!!!