Book Review: “Legacy of the Highlands” by: Harriet Schultz

We all say the words “where did time go” at on time or another. I have been saying it a lot lately.  In 2012 I took a break from blogging. This is my first time back!  Five years!!

The first book I would like to review, as I begin again, is the book I was working on when life interrupted:  “Legacy of the Highlands” by Harriet Schultz. 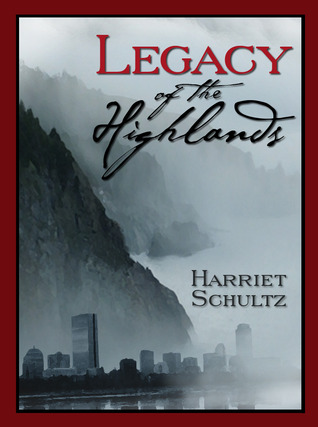 This is a fabulous novel.  It is a jam packed plot, as to rival all good mystery writers.  I am inclined to say, including your favourite authors.  The beginning lulls the reader into a false sense of security in that the beginning is not what it appears – not all pleasure and romance.  The characters are multi-dimensional, soon to be among the reader’s favourite.

Goodreads summary of this novel is as follows:

Young, good-looking, successful and wealthy. Will and Alexandra Cameron had it all until the night he went out to buy ice cream after an evening of passionate sex and never returned. When his body is discovered in a nearby Boston alley, the only clue to his murder is a Scottish sgian dubh dagger left beside it. Will’s grieving widow finds refuge in the Miami villa of his best friend Diego Navarro, who has the means, power and temperament to solve the puzzle and to avenge his friend’s murder. The sinfully handsome and charming womanizer’s feelings for Alexandra run deep, and he becomes equally determined to win the devastated widow’s heart. The attraction between them grows as they follow leads from Miami to Buenos Aires and Scotland, unraveling the Cameron family’s centuries-old secrets.

Do yourself a favour, pick up a copy of Harriet Schultz’s “Legacy of the Highlands”, and you will find joy in the written word.